Laying flush against Jennifer Morozowich’s scalp is a perfectly concealed device that will cause commotion and confusion. That is, when she passes through a metal detector. 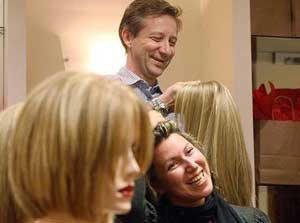 “The only thing I hate about the clips is they set off the security alarm at the airport,” says Morozowich who wears a postiche, a customized hair piece attached to her own hair by five metal clips. The hair “system” makes the 38-year-old director of strategic planning for a marketing agency look like she has thick hair.

“If you listen closely you can hear them click,” she says pressing points on her head. “It’s like a hat. It just sits on your head.”

Morozowich has a form of alopecia, or hair loss, which began thinning her hair when she was 30. “I just one day noticed it had gotten thinner,” she says, describing her hair as fine. She does not have visible patches of scalp and wears the piece for fashion reasons.

Alopecia takes several forms and can range from male and female pattern baldness (androgenic alopecia) to alopecia areata, an autoimmune condition that can lead to complete hair loss on the head (alopecia totalis) and body (alopecia universalis). Morozowich has androgenic alopecia.

On Monday, with two new studies published in the latest edition of the journal Nature Genetics, scientists blew the lid off the long-held belief that men inherit pattern-baldness from their mothers. Both sets of research findings determined a father’s genetics are also responsible.

Dr. Robert Jones responded to the studies and this week began offering clients the genetic test for inherited hair loss. A swab of the inside of a client’s cheek is examined for two specific genes and costs about $400.

An Oakville specialist in hair loss treatment, Jones says close to half of all women will experience some kind of extreme thinning or hair loss during their lifetime. However, he notes, even if women carry the hair-loss gene, it’s hard to predict severity.

“It’s much more important for females to makes sure they get to the root cause of their hair thinning,” Jones says.

Hair loss can also be related to autoimmune diseases, such as lupus, he says, underlining the importance of seeking a doctor’s diagnosis.

Temporary causes can include stress, pregnancy and medications such as antidepressants and certain types of birth control pills. In most of those situations the hair goes into a resting phase, like hibernation, until the stresses are removed, Jones says. “It will come back.”

In North America, the hair loss and replacement industry, for men and women combined, is worth an estimated $4.5 billion, says Jones. “If you take a look at the number of things promoted online, at least 60 to 70 per cent make no difference.” Most herbal supplements, for example, “are bogus” as hair treatments, he says.

Jones offers a free 144-page book, detailing causes and treatments for hair loss, which can be downloaded at drrobertjones.com.

Inherited female pattern hair loss typically hits women between ages 30 to 60, he says. The topical medication called minoxidil (Rogaine) works, says Jones, and if applied consistently, up to 90 per cent of users will see regrowth.

The best and latest temporary treatment for hair loss is keratin hair fibre. “It’s just tiny microfibres that you sprinkle in your hair” that bond to hair roots and give the illusion of density, he says. “It’s like makeup.”

He has also successfully performed scalp transplants by relocating portions of the women’s own scalp with more hair growth.

For Morozowich, her solution awaited at Continental Hair. With locations on Avenue Rd. and at the Toronto Sunnybrook Odette Cancer Centre on Bayview Ave., the shop sells up to 1,000 custom wigs and hairpieces a year.

“It’s very difficult for all of us to realize that hair loss is kind of normal. It’s just like people getting grey hair,” says Michael Suba, Continental’s president. But that doesn’t make it any less devastating for women.

Suba says he has recently seen more female clients in their twenties who are being “proactive” about their hair loss. In response, he launched an ad campaign in September featuring attractive young women with dramatic thinning where their hair is parted. “So when they are ready, they will know we are here.”

“The first one (Suba) showed me eight years ago was so awful I cried.”

She’s still comfortable with her existing hair, but expects she will have to wear a more permanent piece in about five years.

“I know that it will get to that point, and I am glad there is an option when it happens.”