Home » Blog » Blog » Media News » Why Are Wigs So Important For Women Recovering From Breast Cancer?

Wigs are an important part of the recovery for many women who lose their hair because of cancer treatments. Women have such an emotional connection to their hair, and I cannot imagine how emotionally traumatizing it must be for cancer survivors who have to deal with the reality of their hair loss. 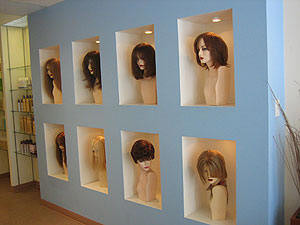 Michael’s family has been in the wig business since 1964 when his parents, a couple of hairdressers, decided to ride the wave of the 60s. Now, the business is operated and managed by Michael.To understand the importance of wigs in the life of many post-recovery cancer patients, I met with Michael Suba, owner of Continental Hair Salons.

Not only is Continental Hair one of first wig salons in Canada, but when Michael opened a location inside Sunnybrook Hospital 11 years ago, his salon became the first private wig salon in a public hospital in Canada. Since then, most new hospitals that have opened in recent years have a wig salon.

Why are women making the trip to Continental Hair Salons?

Michael’s salons might be located in only one city in Canada, but he has clients that fly from across Canada, the U.S., the U.K. and even as far away as Hong Kong to come see him. Since the salon has been in business for more than four decades, it is now recognized as the premier location for wigs and hair pieces.
During the time I met with him, it was obvious from the discussion that cutting corners and cheap hair or cheap manufacturing were simply NOT part of his vocabulary.
Michael also hires some of the best wig stylists in the country to help shape the wigs once his clients purchase them (I’ll be honest … I never even thought of this until Michael pointed this out).
Michael only buys European hair. He doesn’t buy Chinese, Indonesian or Indian hair because for obvious reasons it’s much harder to die dark brown or jet black hair a lighter shade … not to mention that going blonde is almost impossible unless seriously damaging the hair.
Michael personally visits the manufacturers that produce his wigs to ensure the quality of the product and also to make sure these are not “sweat shops”.
The wigs at Continental Hair Salons are about $2,000-$3,000, but you will receive a few hair care treatments as part of that price and you will also be certain that you are getting a quality product that looks very “real”.
When I was meeting with Michael a courier package arrived with hair from Japan. He had me touch it and asked me what I thought. I said it was so soft and such great quality. Then he dropped the bomb on me — he revealed this was a new line of high quality synthetic hair that a contact of his had been manufacturing in Japan. The quality was impeccable and for his clients it means they can get a high quality wig for about $1,500. Another advantage of this synthetic hair is that you can curl it, flat iron it and swim in it without any worries.
I’ve seen wigs and hair pieces in my life and in some cases, I can spot a wig or extensions with my eyes closed, but I have to say that looking and touching the hair Michael sells (even his new line of high quality synthetic hair) makes me a believer that quality is EVERYTHING when it comes to wigs!

Why do women choose to buy wigs?

When I asked Michael that question his answer came as a surprise to me … but it makes complete sense when you think about it:

“When you buy a wig, you buy privacy! You don’t want everyone around you to know you are going through a difficult medical trauma … you don’t want to share this with the entire world. You might also not want to worry your elderly parents and you don’t want to attract other people’s fear. When people view you as ‘sick’ they also view you as being incapable. Basically, you really don’t want to spend your day explaining your situation … that’s what a wig buys you”.

What are some of the prevalent myths and misconceptions about wearing wigs?

The most prevalent myth is that most of us can spot a wig. That is very true when talking about low quality wigs and cheap synthetic wigs, but I can assure you that the wigs at Continental Hair can fool anyone because they really are that good … all the way to the construction of bonnet where the hair is weaved … you can be standing on top of someone with Continental Hair wigs and NOT know.
Another misconception is that human hair is very heavy to wear. That might be true of wigs made back in the 70s, but techniques have evolved and the new generation of human hair wigs are very lightweight … in fact they are often lighter than synthetic wigs.
Wigs for Kids
About 12 years ago Michael decided to find a way to offer affordable wigs for kids undergoing post-cancer-hair-loss. The idea was initiated by a call from the Cancer Society to help legions of kids undergoing cancer treatment, but these wigs were to also help kids suffering from alopecia or those who had lost their hair following a fire.

Another group of kids who benefited from Michael’s generosity were kids suffering from “hyper aging”.

Michael explained what “hyper aging” looked like by giving the example of a patient of his who was 8 years old, but who had the body and system of a 90 year old.

He uses hair donations from Europe and creates “small cap wigs” for kids. The regular cost of a wig can easily reach $2,000-$3,000, but Michael sells these wigs for kids at a nominal fee of about $300.

Michael admits to being in the privacy business, not the vanity business, but from my conversation with him, I’d say that he’s in the “caring and compassion” business because that’s what really transpired from this meeting. Michael Suba genuinely cares about his clients and he really cares about the role his wigs play in their self-esteem.