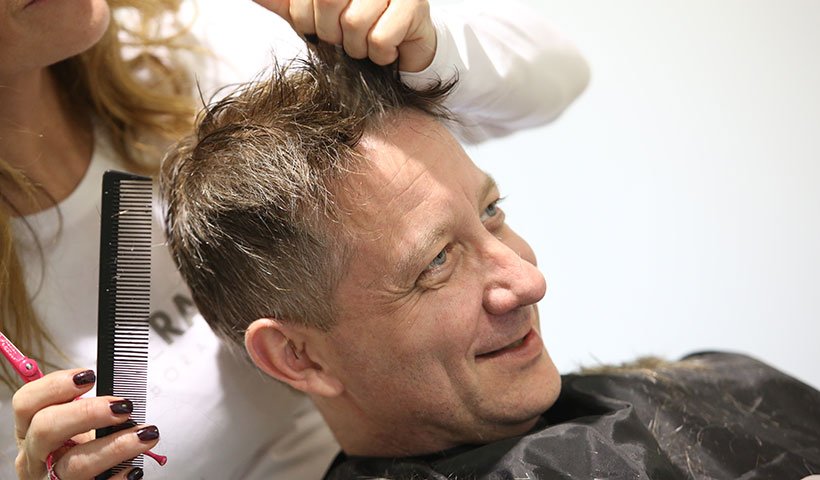 It’s 9 am on a Saturday.
Regular crowd shuffles in…

We start early on the weekend because many of our clients like to have their wigs and hair systems made nice on their day off. This morning I had a client that has worn one of my postiche (topper) designs for many years bring in her sister. My client had just received her fifth postiche earlier in the week and she was very happy. All she could do was tell her sister how happy she was going to be.

Her sister, like her, is suffering from female pattern thinning, but it’s become so thin she can’t cover it any longer. Her sister was so encouraging that I could hardly get a word in. But she is right; she’s going to love it.

My next consultation was a woman that drove down from northern Ontario. She had been to several wig salons and said that she then decided to come see me. She is in her late 60’s and has had fine hair for a long time but over the past year it has accelerated. Now she needs a full wig. The salt/pepper colour is expensive in human hair but it is worth the look. But it has to be custom made. She will be back in a couple months to pick it up.

Then I had a young woman with her mother and aunt come in. She had already bought a wig at the Continental Hair salon at Sunnybrook Hospital but wanted it trimmed. I have a policy that all wigs and hair systems can have additional styling and colour work done for no charge for a month after it’s purchased. It’s called “the tweaking time”. She had purchased this wig several months ago but when her mom called me I told her that there would be no charge.

She is in her early 20’s and lost the hair on the back of her head because of radiation treatment. When she had trouble sitting down in the styling chair her mother told me that she had mild cerebral palsy as well.

The wig was too heavy in front. They had been very cautious about cutting the bangs too short so way too much hair fell in front of her face. I took a display wig and put it on her to show her what a layered front bang would look like. She loved it.

When my stylist Vasella layered the front you could start seeing her face. Vasella works slowly and methodically when styling a wig. She makes sure she does not get ahead of her client (or her cheering section). So it took awhile but finally we could see her face. The sloping bang was still long enough to put behind her ear or up with a clip. They were very happy.

When they were leaving the mother tried to give me a $20 tip. I could see that they were not rich and this was more than an empty gesture.

But my policy is always the same: “You don’t tip the owner. You already paid me.”

I was just happy the left so happy. The girl was beaming.