Back in the 1960’s wearing hair was a fashion statement. A woman was not considered “with it” unless she was wearing a ‘fall’ or a ‘wig’. It was a time when women wore gloves when they went to a hockey game (and a man wore a suit).

It was round about then that my mother, Emma Suba, created what my father named The Postiche. 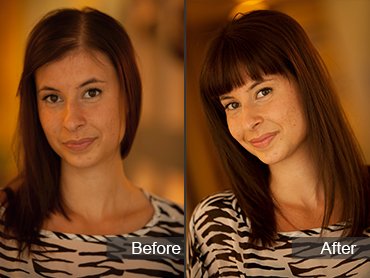 This was a small hairpiece that gave a woman the ability to have a little more length and/or height. It attached to her hair with a large comb. I know it was popular because when I was in first grade back in 1970 I gave one to my teacher and she was absolutely thrilled. It was still a fashion accessory though. A woman wanted to be seen wearing one. But later in the 70’s and 80’s the fashion changed and the postiche faded into history.

In the 90’s I had taken over the management of Continental Hair we were mostly doing women’s wigs. However I started to have more and more women coming to see me with thinning hair problems. Back then we were really the only wig salon in southern Ontario so they naturally called on us. A wig was way too much for their thinning hair loss. Then I remembered the old postiche that my mother had designed. I changed the base and put men’s “clips” on the inside to attach to her hair.

It was beautiful. And women loved it.

I made several design changes over the years to make it lighter and more natural. a ‘French Part’ and lace front are the most recent. But the main thing that has determined the postiche’s success is the fact that we always use really beautiful hair. And not a lot of it. I know women today do not want to look like Miss Louisiana 1968 (not that there’s anything wrong with that). But my clients want the postiche to be undetectable. Seamless. And it is. I actually know that you have seen one. There are several prominent Canadian women that wear a postiche that I made for them. Some are entertainers, some report the news. Some make news. And they are totally confident going on stage or in front of a camera. It gives me a special kind of pride when I am watching TV with a group and see a client of mine on the screen and no one can tell that she is wearing a postiche I designed and made for her.

And now things have changed. When I hosted a group of world hair replacement professionals in 2009 they were astonished to see what was my biggest seller. You see, most hair replacement salons concentrate on permanent attachment systems. When a woman has a permanent attachment hair system she comes in every month to have it re-attached, or serviced. This way the salon has a steady income month to month and the woman has hair that she never takes off herself. My colleagues were astonished that I would not see a client again for years until they wanted a new postiche. I had to tell them that clients come back because they love the look and can maintain it themselves.

By the way, we do permanent attachments at Continental Hair, but that is another blog.

And now EVERYONE is selling the postiche, although they call it a “topper’.  This is good that now women’s hair enhancement is becoming more mainstream. Everyday it becomes more acceptable for a woman to be proactive about her hair loss. But the downside of this is that there are a lot of toppers out there that do not wear well or look good. This is (mostly) because of cost. Inexpensive processed hair is used with short cut-manufacturing methods put together with an unimaginative old fashioned base design. These new toppers are usually heavy and obvious. And so just like any product you have various levels of quality. I cannot blame anyone really since they are new to this. Continental Hair has had 30 years of practice at perfecting the topper, or postiche.

So when looking for a postiche/topper I suggest that you look at the following factors:

My most important bit of advice: Try stuff on. I always tell women that call me that they should see it as  they are just shopping. Look for something in you colour and size and price range, just like a coat or a car. Hair is important (and can be expensive), but you are looking at a positive enhancement of your appearance and that is a good thing. Hair loss can be traumatic and finding the right solution for you is life changing. I know this because countless women have told me so. It worked for them, and it can for you.